Top 20 Things To Do in Jodhpur

Sun City, Blue City and other such beautiful names are enjoyed by much-deserved Jodhpur, the largest city of Rajasthan. The city’s people have embraced their age-old culture and this is one of the major reasons why it is visited by huge number of people, regardless of their geographical location.It’s not its culture; Jodhpur has some legendary edifices to be proud of, like the Umaid Bhavan Palace, Mehrangarh Palace and Jaswant Thada. Talking of culture again, it comes as an obvious fact that Jodhpur houses a number of important temples and its festivals like Maand Festival, RIFF and Kite Festival are among some of India’s most vibrant festivals.

Nature-lovers have lakes to spend their time around, while adventure-seekers can try their hands on different adventure-activities like the flying fox.

This article focuses on the humongous opportunities Jodhpur holds for you. So, here are top 20 things to do in Jodhpur.

This obviously had to be at the top of the list. One of the largest forts of India, Mehrangarh Fort sits upon a hillock at a height of 120 meters, overlooking the Blue City of Jodhpur. The fort isn’t beautiful or delicate, but it is legendary and impressive. Impressions of cannon balls are still seen on one of its seven gates. It was built sometime around 1460 by Rao Jodha. The fort isn’t all about rugged charm; you can have a look at some of the best masterpieces in the gallery of the fort. The museum showcases armory, paintings, turbans, folk music instruments, palanquins, elephants’ howdahs etc.

2. Experience the Essence of Royalty in the Umaid Bhawan Palace

Umaid Bhawan is probably one of the most iconic palaces in India, better yet; it has now been transformed into a luxury hotel. By 1943, the construction of the palace was completed and today it is one the largest residences in the world. The palace is divided into three parts- hotel, residence of royal family and a museum. The museum lets its visitors get the taste of history through various artifacts and other exhibits. Pictures of the palace during different times in the place, banner and antique clocks are some of most outstanding exhibits here. Also the vintage car collection gallery is a prime highlight.

3. Spend Some Time in Jaswant Thada

Stark yet soothing, Jaswant Thada, a white-marble memorial was built by 1899 by Maharajas Jaswant Singh ii in the memory of his father. Today, like it has always been, this is an important landmark in Jodhpur. It is a cremation ground for Jodhpur which is prettified with jali-work, portraits of Rathore rulers, mulch-tiered garden, a small lake and carved gazeboz. The memorial is located to the left of Mehrangarh Fort and one needs to trek through rocky hill in order to reach here.

Balsamand Lake was built in 1159 AD in order to provide water to Mandore. This one-kilometer long lake is located beside the Balsamand Lake Palace which was built as a summer palace. Peacocks, jackals and other such animals and birds can be spotted from the lake. Grove of mango, papaya, plum, guava and pomegranate etc. surround it.

Having lazy hillocks and Babul trees by its side, Kaylana Lake dates back to 1872 when Maharaja Pratap Singh built it. The palaces and gardens built by former rulers were destroyed in order to give space to this lake which covers an area of 84 km sq. This scenic spot is ideal for bird-viewing, as migratory birds like Siberian Crane come here and build their nests. A lot many nature-lovers, photographer and people looking for some alone-moments spend their time by the lake or boating on it.

6. Shop Around the iconic Ghanta Ghar 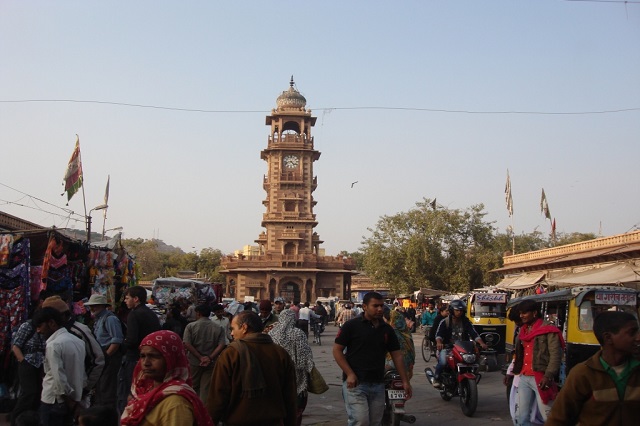 Located beside the bustling Sadar Bazar, Ghanta Ghar or Clock Tower is often frequented because of rich colorful goods sold in the vicinity. People can buy marble-inlay items, miniature elephants and camels, clay figurines, Rajasthani textiles and traditional jewelry among many other items, from the market.

This is a popular festival celebrated in Rajasthan, Gujarat, Madhya Pradesh and West Bengal. It falls in March or April and is specially celebrated by girls and women. Ladies worship Lord Shiva’s consort, Gauri in order to celebrated marital fidelity, spring and harvest. While unmarried girls pray for a good husband, married ones pray for a happy married life. Ladies fast for eighteen days, apply mehendi, some families even paint fresh wooden images each year, sing songs of Ghudlia during the span of the festival.

This, one-of-its kind park, is situated beside the mighty Mehrangarh Fort. The main intention of its founders was to make a suitable home for native plants that grow on rocks and they are indeed doing fantastic job. There are three trails for the tourists, all of which lead back to the Visitors Center, where you can not only buy tickets but can also relax in the café or buy souvenirs. Jaswant Thada is located very near to the park.

9. Treat your eyes with the Cenotaphs of Mandore Garden

The Cenotaphs (or dewals) of Mandore Garden are popular local attraction. One if its unique feature is that it doesn’t have any semblances with typical chhatri-shaped cenotaphs of Rajasthan. They are built mainly of red sandstone with elegant spires, four stories and fine columns. Surrounding these cenotaphs are manicured gardens, which has a Shrine of the Three Hundred Million Gods with vivid images of Hindu god.

10. Go for Desert Safari at Ossian

One of India’s most popular festivals, Jodhpur International Desert Kite Festival is attended by people coming from different parts of the world, many of whom visit Jodhpur exclusively for the festival. This three-day long festival takes place annually and features colorful and unique kites throughout the ground. Here you can witness one-of-its-kinds kite-flying choreography. Various competitions are also held here such as the Display Flying and Fighter Kite Competition, winners of which are awarded dinner at an exotic location.

There perhaps isn’t a better way to get in acquaintance with the essence of Rajasthan, other than attending Rajasthan International Folk Festival, which also happens to be one of India’s most popular festivals. The event celebrates and promotes traditional folk music and arts of Rajasthan. It is made even grander as it takes place in the premises of Mehrangarh Fort.

13. Pay a visit to Udai Mandir

Udai Mandir is one of Jodhpur’s popular temples. It is supported by 102 pillars and stands on a huge platform. The walls are adorned with paintings of Yogasanas and Nath Yogis. The Garbha Griha of the temple is covered with cloth, with railing around it finely carved. Known for its architecture, the gold polish of the temple hasn’t lost its sheen.

Covering an area of about 82 acres, Umed Garden is named after Maharaja Umed Singh, who developed it. The park, other than beautiful flowers houses a museum, library, fountain and zoo. The zoo is named Walk in Aviary and was constructed in 1978.  Here, you can spot ducks, crocodiles, lions, deers, leopards, foxes, rabbits, local, Australian and African parrots, among many.

Rai ka Baag Palace is located near Raika Palace Railway Station. It was built in 1663 by the queen of Maharaja Jaswant Singh-I and was King Jaswant Singh II’s favorite palaces. He loved to spend time in palace’s octagonal-shaped bungalow. Swami Dayanand Saraswati, founder of Arya Samaj, visited the palace and gave sermons in the ground in 1883.

With the incredible backdrop of Mehrangarh Fort (one of the largest forts of India), you can try your favorite adventure- Flying Fox. This not only gets your adrenaline rushing but lets you savor spectacular views of the vicinity. Also, you don’t have to worry about the safety as this activity is offered by experienced company that takes safety as a priority.

Falling in the month September or October, Marwar Festival or Maand Festival is celebrated for two days. Maand basically is a form of traditional music that talks about romance and grandeur of Rajasthan rulers. The festival dates back to 1459 AD when the Rathore’s chief Rao Jodha found it. During the festival various events and activities take place- such as puppet shows, magic shows, horse-riding, camel tattoo shows, horse-polo along with dancing and singing.

18. Take a Stroll on the Sardar Government Museum

Taking you down the memory lane, Sardar Government Museum houses weapons, textiles, coins, miniatures, portraits, manuscripts, local crafts and sculptures that date back to 6th and 10th century. The museum was built during the reign of Maharaja Umaid Singh in 1909. When done with the museum, you can take a stroll in the zoo or read in the public library.

Sarafa Bazar is a one-stop shop, dealing in anything and everything such as footwear, Bandhinis, antiques, bangles, accessories, leather items, textiles, utensils and what not!

Dating back to 1812, Mahamandir Temple is a brilliant piece of architecture and off course, its spiritual significance. The temple is dedicated to Lord Shiva. This 84-pillared temple features stone carvings that depict various asanas and other artworks.