The Maharajas’ Express, one of the world’s most luxurious trains, owned and operated by Indian Railway Catering and Tourism Corporation (IRCTC), has recently been honored with the 2016 Seven Star Luxury Hospitality and Lifestyle Awards at Marbella in Spain.

As part of the award, Maharajas’ Express was presented the “Signum Virtutis“, the seal of Excellence, from the Seven Star Luxury Hospitality and Lifestyle Awards. The honor was conferred at an impressive function held at the Villa Padierna Hotel in Marbella in Spain. It is one of the highest honors received in the sector of hospitality and tourism. 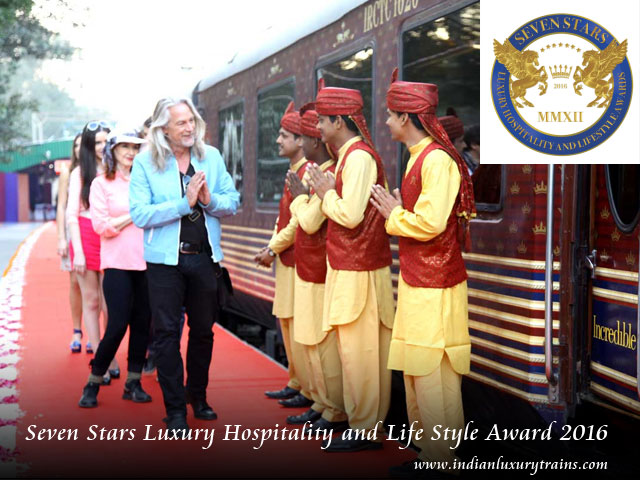 The Seven Star Luxury Hospitality and Lifestyle Award in the ‘Seven Star Experience Sector’ for Maharajas’ Express was received by IRCTC Chairman and Managing Director Dr. A. K. Manocha. The SIGNUM VIRTUTIS is the highest, most exclusive award for the pinnacle in Luxury Hospitality & Lifestyle. The train has bagged the award consecutively for the second time.

The Maharajas’ Express was chosen to be honored chosen from the nominees like Rocky Mountaineer, Rovos Rail,  the Royal Rajasthan on Wheels and other seven star experiences in the world. The award came owing to high scores in several aspects like the menus, the cabin experience, the excursions and the events organized for guests.

The Maharajas’ Express has various other awards and accolades to its name. It has been voted ‘The World’s Leading Luxury Train’ four times in a row at The World Travel Awards in 2012, 2013, 2014 and 2015. It has been the first runner up in the Specialist Train Operators Category at Conde Nast Travelers Reader Choice Travel Award in 2011. It also has the recognition of Best Luxury Train at CNBC Travel Awards 2010.

The Maharajas’ Express is India’s leading luxury train. The tourist train is owned and operated by Indian Railway Catering and Tourism Corporation (IRCTC). It is one of the most expensive luxury trains in the World. It runs on 5 rail journey circuits with choices of 8 Days/ 7 Nights and 4 Days/ 3 Nights itineraries. The destinations covered include Agra, Jaipur, Ranthambore, Bikaner, Jodhpur, Udaipur, Balasinor, Ajanta, Gwalior, Khajuraho, Varanasi and Lucknow. The train operates only between the months of October and April. 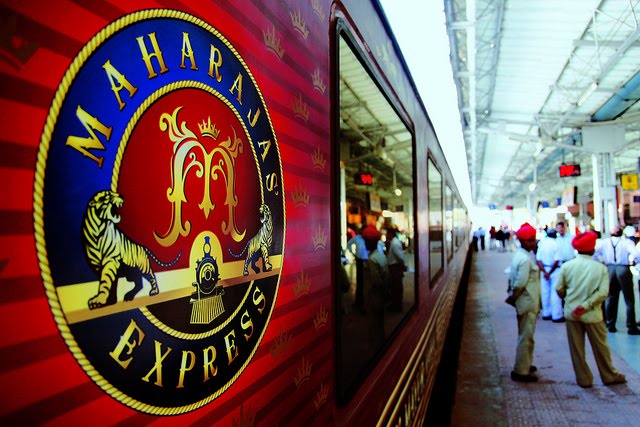 The Maharajas’ Express luxury train has the best of modern amenities to offer. Guests are treated to a plethora of comforts and memorable experiences. The train comprises 23 carriages which include accommodation, dining, bar, lounge, souvenir shop, generator, and store cars. The train is also equipped with a water filtration plant. 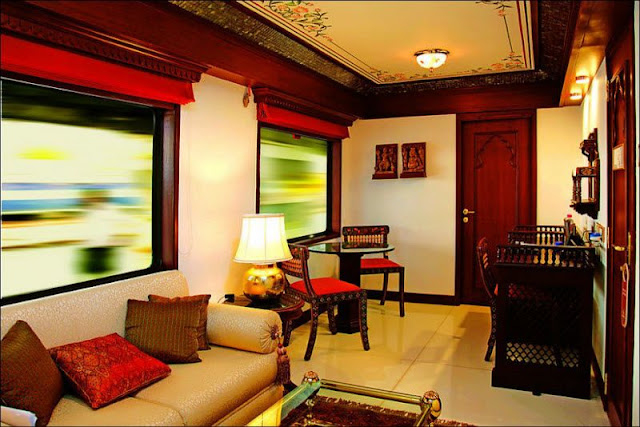 Accommodation is available in 14 guest carriages with total passenger capacity of 88. There are 43 individual cabins divided into 20 Deluxe Cabins, 18 Junior Suites, 4 Suites and a Presidential Suite offering 5-star equivalent accommodation. 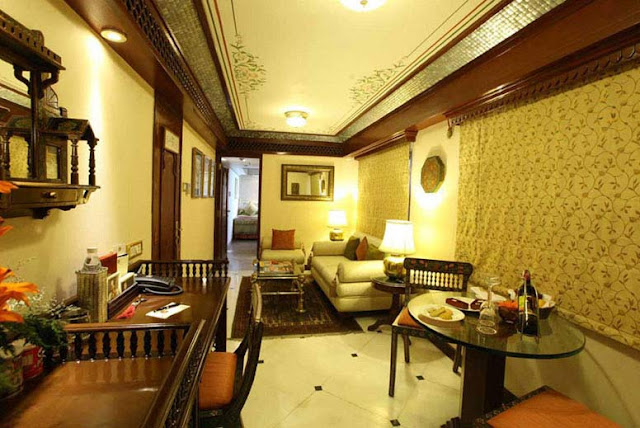 Additionally, there are four Suites available, having large separate sitting and sleeping areas. The Maharajas’ express Presidential suite is of its kind in the world for commercial use. It is built on an entire rail carriage, integrating a separate sitting-cum-dining room, a master bedroom and bathroom with shower and bathtub, a twin bedroom and bathroom with shower. 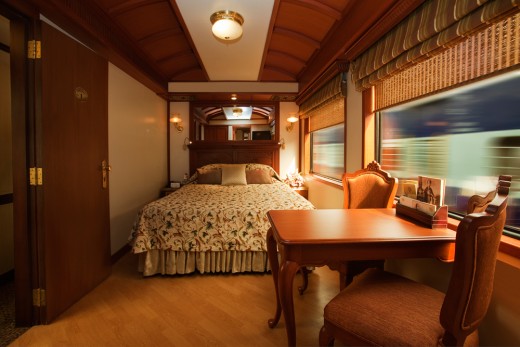 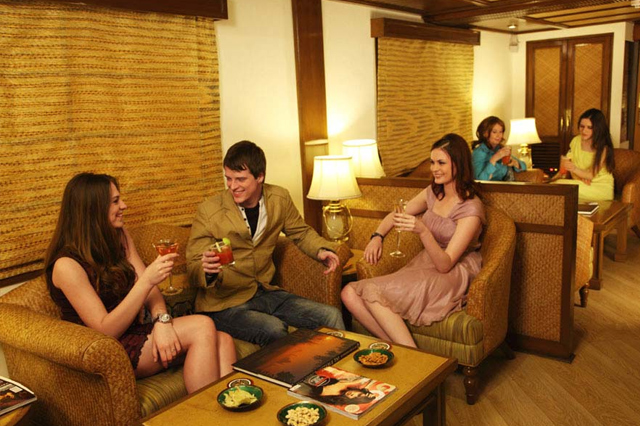 The train has two dining cars designed for full five-star dining service. Each of them have a seating capacity of 42 guests at a time. The restaurants are named Rang Mahal and Mayur Mahal. Mayur Mahal has peacock feather theme in its décor. The train has a state- of- the- art kitchen car designed to provide a range of gastronomies. Restaurant menus include traditional Indian cuisines along with Continental, Chinese and International cuisines. 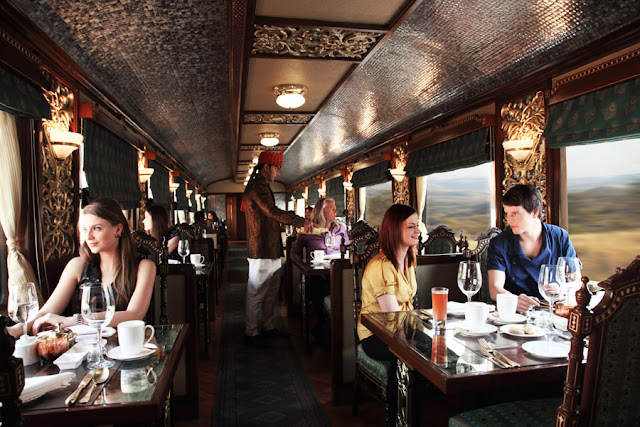 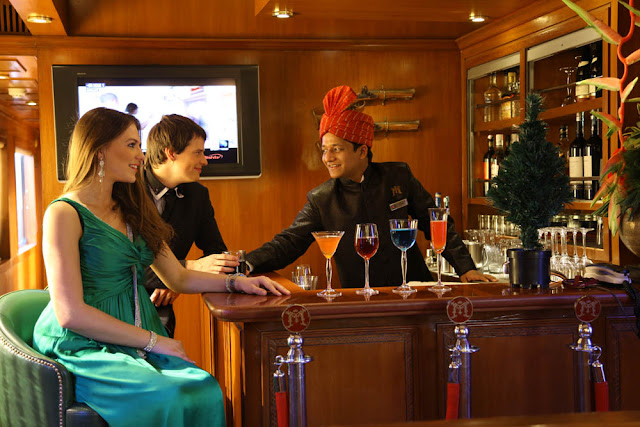 The Maharajas’ Express truly recreates the splendor of the era of India’s Maharajas. Their luxury travels are certainly experienced during the train travels. The luxury train is definitely deserving its title of ‘Seven Star Experience’.
Related Post:
Maharajas Express World Travel Award
Most Interesting Facts about Maharajas Express