Top 16 Things to do in Orissa

Orissa is a state located on the eastern coast of India, with a coastline of about 485 km. So yes, the state is home to exotic beaches too, along with significant shrines, amazing forts, vibrant ethnicity and almost everything beautiful. A radiant flaunt of heritage and history is found in the monuments of Orissa like the Udayagiri and Khandagiri caves. Owing to variant landforms, Orissa possesses sparkling waterfalls and indeed a sprawling biodiversity. There is so much to see and do in Orissa, so grab your popcorn while we give you a brisk view of things to do in Orissa.

This temple of Lord Jagganath (Shree Krishna) dates back to 12th century and is among the most important temples of Odisha. The temple is popular in other parts of India too, for its Ratha Yatra Festival. Jagannath Puri is an important Hindu pilgrimage center of India, mainly because of the fact that this temple happens to be one of the four destinations in Chaar Dhaam Yatra. Char Dham Yatra circuit is considered to have major significance in a Hindu’s life.

Other than Puri, Badrinath, Rameswaram, and Dwarka are also included in the holy circuit. It is located on the coast of Bay of Bengal and is venerated by the followers of Vaishnavas. Legend says that the King who made this temple had a vision in his dream of Lord Jagannath. In the dream the lord asked the king if could build a temple, and so the king did.

Sun Temple of Konark (Orrisa) is popular in India, owing to its striking design. This temple is dedicated to Lord Surya (Sun God) and UNESCO has listed it as a World Heritage Site. That’s not it; the temple has also been featured in the list of Seven Wonders of India by NDTV and Times of India. The temple was built in 13th century, by King Narsimhadeva I.

Spread over an area of 1100 km sq and the second largest lagoon of the world, Chilika Lake is home to tremendous amount of bird species, both resident and migratory. The Bird Sanctuary in Chilika Lake’s Nalaban Island is a major attraction here. Chilika Lake is one of the best bird-watching spots of India. Here, you may catch a glimpse of several birds like herons, egrets, spoonbills, storks, teals, pochards and even dolphins.

Lingaraja Temple is dedicated to lord Harihara (Lord Shiva) and is the largest temple in Bhubaneshwar. The temple is about a thousand years old and this is one of the parts of the Golden Triangle of Orrisa (Bhubaneshwar, Konark and Puri).

The holy text Brahma Purana has a reference of this revered temple. Lingaraja Temple was built in the 7th century by ruler Yayati Kesari. During the whole day, worship services are offered twenty two times in the temple. And the image of Lingaraja is taken to Jalamandir once a year for special offerings.

The zoo also has an aquarium which houses a variety of fresh-water fish. Nandankanan Zoological Park also promotes the idea of Adopt an Animal and manages breeding programs for white tigers, crocodiles and pangolin.

Relaxing on the Chandipur Beach is an unforgettable and highly rejuvenating affair. This is one of the few beaches of the world where sea waves recede up to 5 km daily. People usually chase the waves by riding a jeep. The babbling waves rising and descending, casuarinas trees stretched to miles and sand dunes conspire to create a peaceful ambience for the weary soul. Chandipur Beach is located 200 km away from Bhubaneshwar, near Balasore Town.

Carved by nature and mankind, Udayagiri and Khandagiri Caves are situated on two hills mentioned as Kumari Parvat in Hathugumpha inscription. About 35 caves were excavated from both the hills. Hathigumpha (Cave 14), Ganeshagumpha (Cave 10) and Rani Ka Naur (Cave 1) are known for their exceptionally brilliant engravings.

The Ananta Cave (Cave 3) has carved figures of elephants, athletes, women and geese. Besides the fine exhibition of craftsmanship, you can savor the beautiful view of the vicinity from the summit of Khandagiri Hill. Udatagiti and Khandagiri Caves are popular caves in Orissa.

Besides the renowned Jagannath Puri Temple, Puri is brimming with many other spectacular locations; like the Puri Beach. This is often referred to as the Golden Beach of Puri, credits to the sparkling golden sands.

There are several other religious places to visit in Puri like Shree Lokanath Temple, Bedi Hanuman Temple, Shree Gundicha Temple, Chakra Teertha Temple and Mausima Temple.  Puri is one of the destinations of the most revered Char Dham Yatra.

[ Check Out our list of Top Beaches in India ]

The capital of Orissa, Bhubaneswar has a rich history datable to three thousand years back. The name of the city has been derived from the word Tribhuneswar (Lord Shiva), which literally means Lord of Three Worlds. Insignia of Kalinga Architecture is witnessed in its nooks.

Also regarded as The Temple City of India, Bhubaneswar merges with Puri and Konark to a venerated pilgrimage circuit, The Golden Triangle of Orissa. Other than the attractions of Bhubaneswar listed in this article; Mukteshwar Temple, Brahmeshwar Temple and Dhauli are must-visit locations in Bhubaneswar.

[ Also check out the top temple in India ]

Popular for the Sun Temple, Konark is silently nestled on seashore. As the town is embraced by gurgling sea waves, it doesn’t come as a surprise that Konark also has an exotic beach around its corner, Chandrabhaga Beach. This is one of the best beaches to visit in Orissa.Konark Dance Festival too is a major attraction of the town. Similarly Magha Saptami Mela is a popular festival of Konark. Kuruma Beach, Archeological Survey of India Museum and Konark Math are other attractions of Konark that must not be missed.

Simlipal Tiger Reserve or Simlipal National Park is one of the most popular national parks of Orissa. This is a part of Mayurbhanj Elephant reserve; along with Hadhgarh Wildlife Sanctuary and Kuldiha Wildlife Sanctuary. Talking of Simlipal, it covers 845 sq km of area. Under this sprawling area, there are some beautiful waterfalls, like Joranda and Barehipani. The park is home to Bengal Tigers, wild elephants, gaurs, Chausingha and indeed an expansive biodiversity.

Here are some more wildlife vacation ideas in India if you are just looking to explore wildlife in India.

Nestled adjacent to Barabati Stadium, Barabati Fort is datable to 14th century. Its moat, gate and earthen mound paint a picture of the past.  It narrates the tale of Ganga Dynasty and overlooks the splendid view of the Mahanadi River. Originally it covered about 102 acres of land and used to be a nine-storied structure. This hasn’t lost its charm however, but today it can be listed a popular fort in Orissa.

[ Also check out our list of Hill Forts of Rajasthan ]

An important port of Orissa, Paradip Port is in function 24×7. This also is the largest port of East India. As the shipments cruise along the coast, tourists can indulge in a boating session. It is pleasurable to take a stroll in the Paradeep Beach. In a short distance from the port is Smurti Udyan, a beautiful garden dedicated to the people who lost their lives in the cyclones of 1990s.To behold the sight of rare species of crocodiles and other animals, proceed to Gahirmatha Beach. One of the popular attractions near Paradip Port is Bhitarkanika National Park. Also don’t miss to gorge on some drool-worthy sea food around.

Most of Orissa is covered with hills and plateaus and this makes it a state with beautiful waterfalls. Highest waterfall of Orissa is Barehipani Waterfall, which is 399 meters tall.  This is a two-tiered waterfall located in Simlipal National Park. The area is serene and enchanting. Other popular waterfalls of Orissa are Putudi Falls, Khandadhar Falls and Harishankar Falls. 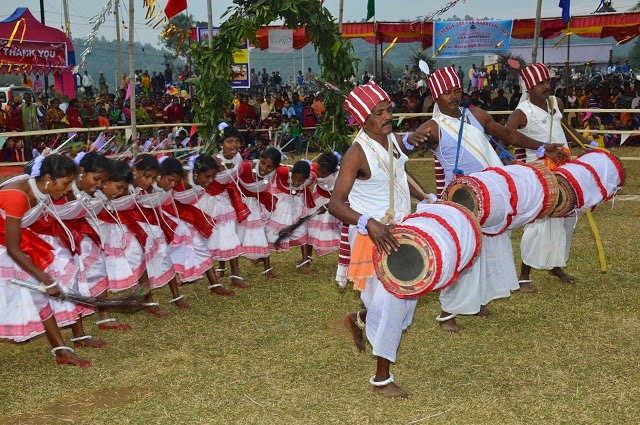 To experience the austerity of an urban township visit the villages of Orissa. Orissa alone is home to about 62 types of tribes. Some of the most popular tribal villages for the tourists in Orissa are Rayagada, Bantalbiri and Onukadelli. Rayagada is known for its wall paintings and its market, Bantalbiri stand out with horticulture and Onukadelli is renowned for its markets.