The Intangible Cultural Heritage of India is an indispensable part of Indian culture, heritage and ethos. The cultural manifestation contribute to give a sense of identity to continuity from past, to present and further to the future. Understanding its worth, UNESCO has not restricted Cultural heritage to collections of objects and monuments, but also included the intangible elements of culture. These include – Performing arts, Oral traditions and expressions, Social practices, rituals and festive events, Traditional craftsmanship, Knowledge and practices concerning nature and the universe.

Let’s check out the 13 traditions which are included by UNESCO in the list of Intangible Cultural Heritage of India. 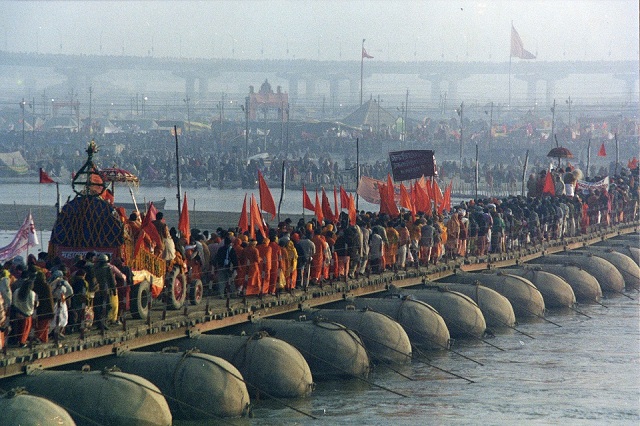 One of the major pilgrimages for Hindus, Kumbh Mela is celebrated 4 times over the course of twelve years. The fervor, passion and faith of Hindus is apparent from the statics of the head count attending the Kumbh Mela. Lakhs of devotees gather at a selected destination out of the four reserved locations where the mela is hosted after a span of 12 years.The festival takes place along of the banks of river Ganga in Haridwar, Triveni Sangam in Prayag, Godavari in Nasik, and Kshipra in Ujjain. Going with the Vedas, it is believed that during the Kumbh Mela, the water of these river turns into nectar and taking a holy dip in them washes away all the sins. The 2000-year old festival is so spectacular that it ranks under the UNESCO’s List of Intangible Cultural Heritage of India. 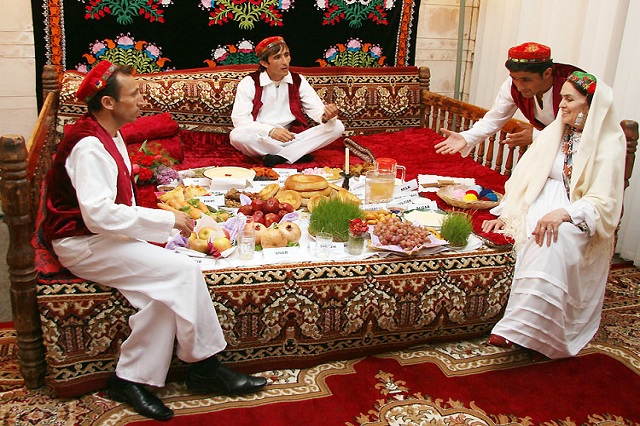 Spread across various countries, Navroz is known by different names in different accents. The festival marks the starting of the Parsi New Year on March 21st every year. Parsi community celebrates the fiesta for wealth, health, productivity and prosperity. The merrymaking begins by decorating houses, wearing new clothes and finally by visiting the Fire Temple – a place of worship for Parsi community. Post all the rituals, special prayers are offered and the fiesta proceeds with relishing lip-smacking delicacies. Children are bestowed with special tokens. All this lasts for over two weeks.The highlight of the gala is gathering around the table which is adorned with objects symbolizing brightness, purity, wealth and livelihood. Street performances of dance and music, traditional sports, public rituals and handicrafts making are also the important part of the celebrations. The younger generation inherits these practices from their elders. 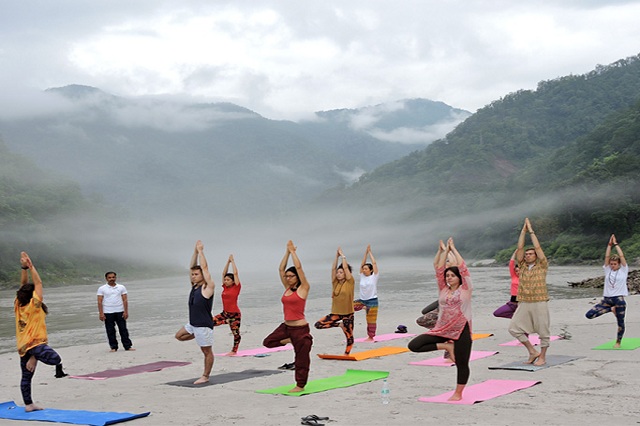 Another practice which has made its way to the UNESCO’s List of the Intangible Cultural Heritage of India is Yoga. Finding its mention in the religious scriptures of Hindus, the ancient practice helps in the unification of the body, mind and soul. With its values forming a major part of the community’s beliefs, Yoga boosts spiritual, mental and physical wellbeing. Various postures and asanas are the most apparent facet of this intense science of describing the countless potentials of human soul and mind. One can grasp the complete quintessence of the way of life by practicing Yoga.The practice was introduced to the West by the Indian Gurus (masters). Meditation, series of postures, word chanting and controlled breathing are the essentials of Yoga. The knowledge was passed by the masters to their pupils in hermitage and yoga ashram which is still available till date in Rishikesh, also known as the Yoga Capital of The world. Attend the amazing event of the International Yoga Festival that is the biggest celebration of the ancient practice.

4. Traditional brass and copper craft of utensil making among the Thatheras of Jandiala Guru, Punjab, India 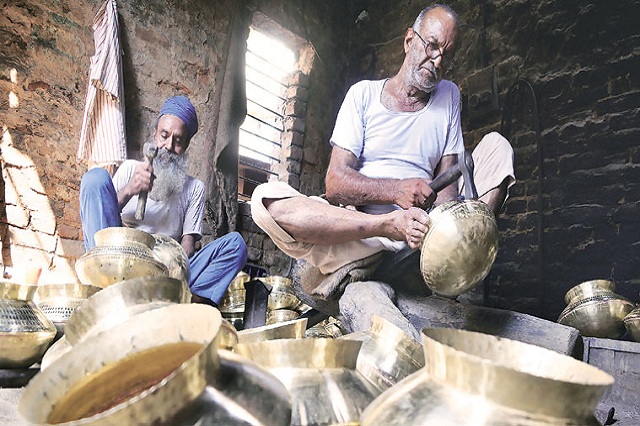 You might have heard of the benefits of eating in the utensils made up of brass and copper. But, have you ever imagined from where and how these utensils come? The answer to the query is Thatheras of Jandiala Guru. The traditional brass and copper craft of utensil making involves cooling of metal cakes obtained after melting the scrapes of copper and brass. These cakes are then rolled into thin plates of desired thickness. The plates are then purchased by Thatheras and molded into desired shapes by hammering it.While molding, desired designs are etched onto them. Specific temperature is required to mold the plates into huge utensils and the temperature control is done manually using hand-held bellows. Cleaning and polishing also takes place manually using dilute acids and tamarind juice. The utensils so obtained are not only used for utilitarian purposes but hold ritualistic importance as well. The entire process is included in the UNESCO’s List of Intangible Cultural Heritage of India. 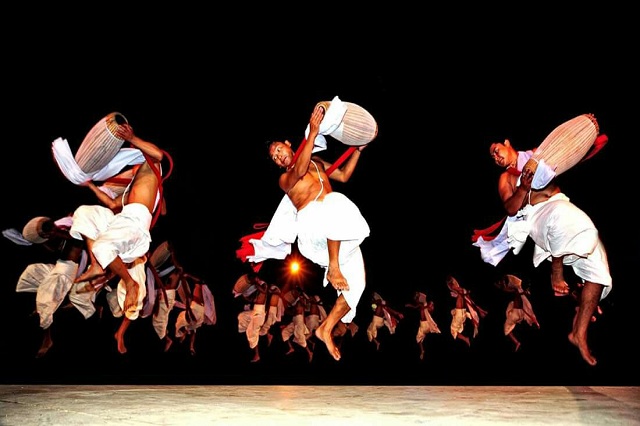 Sankirtana is a form of performing art. Performed in the domestic spaces and temples of Manipur state, the art form involves drumming, ritual singing and dancing. Showcasing matchless vitality and religious faith, the performances depict many incidents from Lord Krishna’s life, often leaving behind the spectators with tears in the eyes.A group of ten singers-dancers along with two drummers grab the center stage in a domestic courtyard or a hall. Included in the List of the Intangible Cultural Heritage of India by UNESCO, the art form continues from generations to generations by traditional and formal education. Sankirtana brings people together and binds them closely to their community. Acting as the cohesive force between the Manipuri Vaishnavities, the performing art adds to the joy of festive occasion. 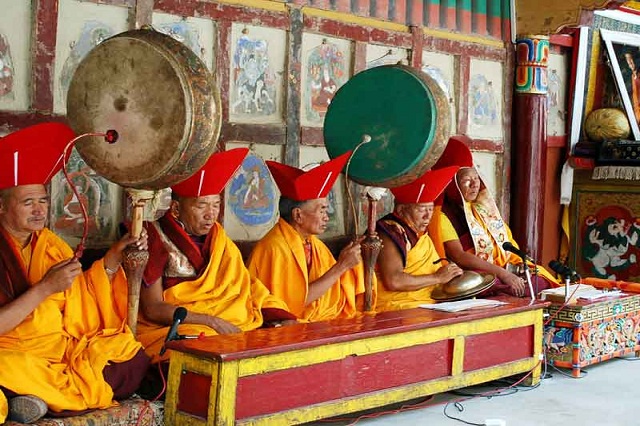 Buddhist chanting of Ladakh is a form of reciting of sacred Buddhist texts in the trans-Himalayan region. Buddhist Lamas perform the chanting of the holy text and it acts as a prayer to the almighty. The practice is carried out to promote the spirit, philosophy and teachings of the Buddha. Also, it is done to seek the personal growth of the practitioner and world peace. The chanting style varies from sect to sect and from monasteries to monasteries. It is a trend to perform the chanting on important days of Agrarian and Buddhist calendars and during life-cycle rituals.Chanting is practiced to enhance the moral and spiritual well-being of the people. Peace of mind and purification are also inevitable outcomes of the process. Further, the wrath of the evil spirits is appeased by the same. Chanting also invokes the blessings of the Bodhisattvas, Buddha, deities and rinpoches. The practice has also been defined in the UNESCO’s List of Intangible Cultural Heritage of India. 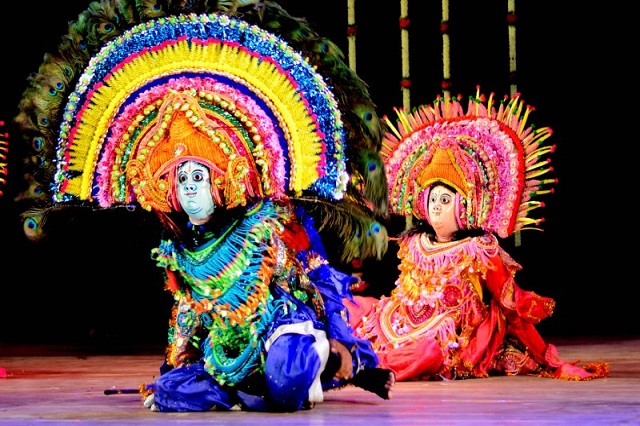 Various episodes from Mahabharata and Ramayana are enacted in three distinct styles hailing from Purulia, Seraikela and Mayurbhanj. Male dancers from the local communities or families of traditional artists learn the dance form of Chhau. Making nights more beautiful, the dance is performed in open space to folk and traditional melodies. Musical instruments like Shehnai, Dhol and Dhamsa make the performance come to life. 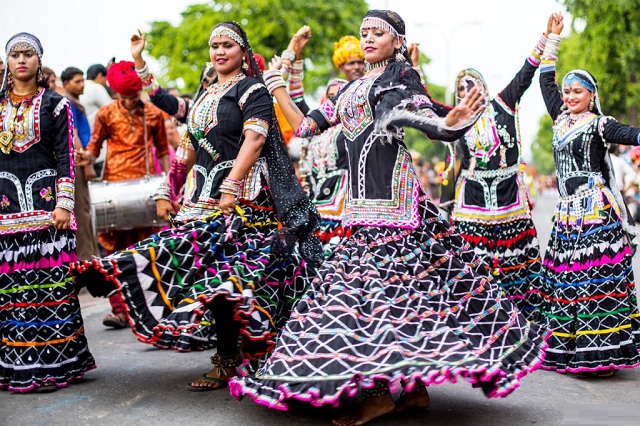 Finding mention in the UNESCO’s list of Intangible Cultural Heritage of India, Kalbelia folk songs and dances of Rajasthan is one of the most unforgettable experiences of the royal state. An important part of the Kalbelia culture, the dance marks a joyful occasion. The tradition is into practice since yesteryears when Kalbelia used to carry cobras in basket and their women used to sing and dance to the tunes to earn a livelihood.The dance form imitates the movements of snakes. Poongi, a musical instrument is an important part of the practice. Kalbelia folk songs and dances are the efforts of the community to revive their cultural heritage. The flexibility and litheness of the dance is apparent from the glimpses of acrobatic movements. Women wear impressive and vibrant dresses though always in black to show the connection with the snakes. 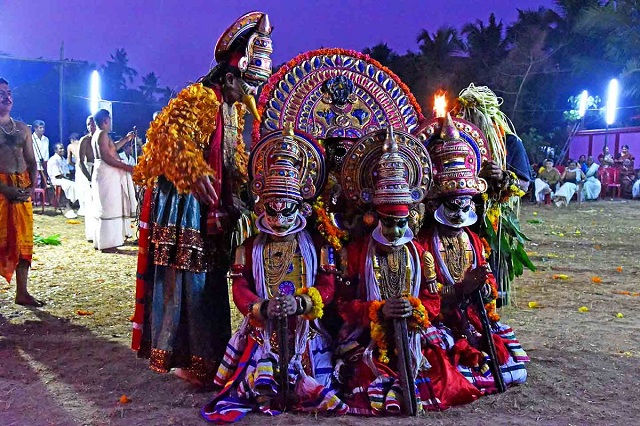 The ritualistic art form of Kerala, Mudiyettu is based on mythological tale of fight between the demon Darika and Goddess Kali. Entire village participates in this community ritual. A day is selected after the harvesting of the summer crops and everybody reaches the temple early on this day. A huge image of Goddess Kali is drawn on the floor of the temple by performers who have purified themselves by fasting and prayers. The image is named as ‘Kalam’ and is drawn with organic powders.It is believed that the spirit of Goddess is imbued by the process. Post this Kali-Darika myth takes place. The demon is eventually vanquished by the Goddess. The dance performance marks the beginning of a prosperous and peaceful New Year. Mudiyettu rejuvenates and purifies the entire community. Temples of Kali also known as Bhagavati Kavus in Kerala host the dance performance. 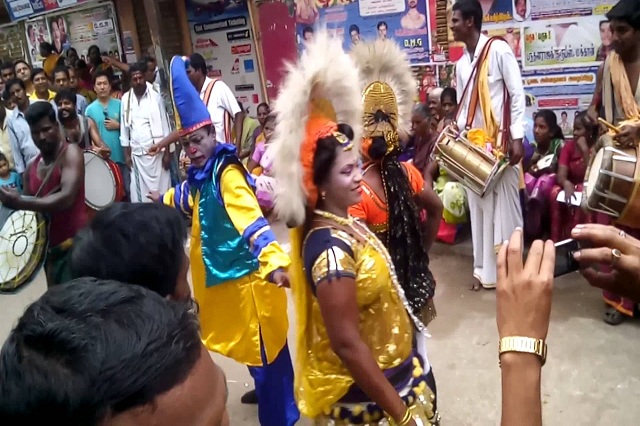 Come, April and the twin villages of Saloor-Dungra in Uttarakhand become alive. Ramman, a religious festival is celebrated with great enthusiasm and zeal in the honor of the tutelary God, Bhumiyal Devta. Featuring in the UNESCO’s List of Intangible Cultural Heritage of India, the fiesta in the form of theatre is an important form of heritage of only 196 families.  Total 1800 people of both the villages take part in the ceremony without considering the cast and the creed.

The number 18 plays a major role in the gala. As there are 18 people wearing 18 masks to play 18 characters and dancing on 18 beats to celebrate the 18 puranas. As per the traditions, Lord Ganesha is worshipped first and foremost. Bhumiyal Devta and Nar Singh Devta are pleased thereafter. The theatre then takes place after offerings are made to the almighty. 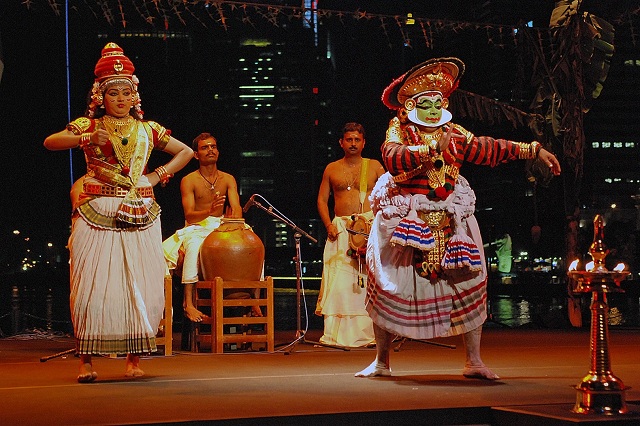 Earlier a part of the temple rituals, Kutiyattam is now practiced in the province of Kerala. Also known as Koodiyattam, the historic classical dramatic art form actually means ‘acting together’. Musical instruments, elaborate costumes, dramatic make-up and jewelry help to showcase infinite moods skillfully. This helps the art admirers to get transferred into a different world altogether and enable the ancient living theatrical tradition to grow.Kutiyattam is performed by the Nangiars women and reflects the local traditions of Kerala and a confluence of Sanskrit classicism. Hasta-abhinaya (hand gestures) and Netra abhinaya (expressions of eyes) are the vital aspects of the 2000-year old practice. A myriad of emotions and expressions, the art form requires rigorous training of ten to fifteen years. Various scenes from the famous epics are enacted by the performers. The entire performance can lasts from hours to days. 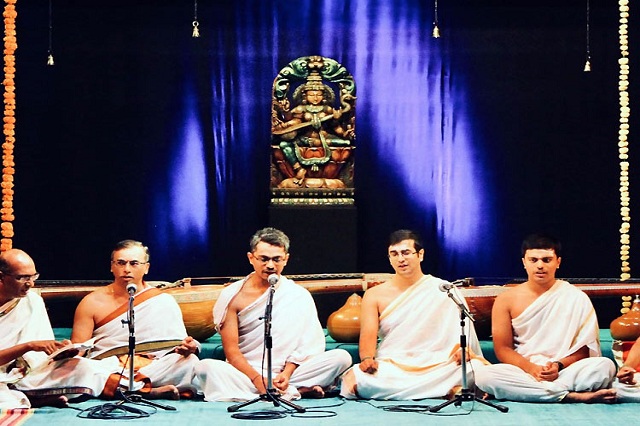 Originating in the ancient Indian subcontinent, the Vedas are the oodles of texts of knowledge. Philosophical dialogue, Sanskrit poetry, ritual incantations and myths are beautifully inscribed in these religious textbooks. Hindus hold a strong faith in Vedas which are primarily four in number. The Rig Veda consists of ancient Indian Vedic Sanskrit hymns. The Yajurveda inscribes ritual offering formulas. The Samaveda features melodies and chants. The Atharvaveda is collection of procedures for everyday life.Vedic chanting is the traditional way of reciting the Vedas. The cantos of Vedas were enchanted during the sacred rituals and a few were intoned daily in Vedic communities. Finding a place on UNESCO’s List of Intangible Cultural Heritage of India, the tradition of Vedic chanting comprises of several ‘paths’ (ways of chanting the Vedas). Special attention is paid to the manner of recitation of each and every word to keep its pronunciation intact.

13. Ramlila, the traditional performance of the Ramayana 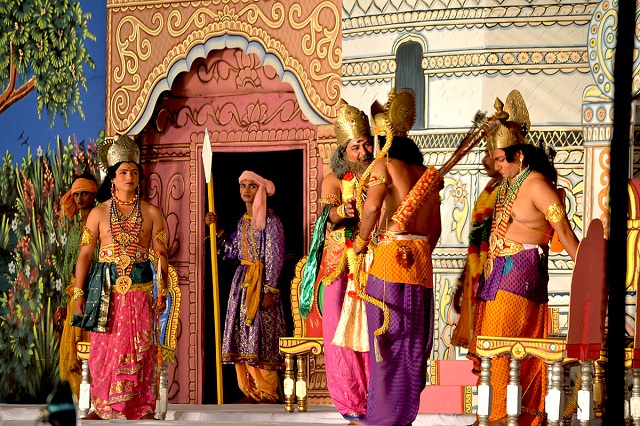 Ramlila actually means Rama’s Play and is the traditional performance of the Ramayana. Narrating the life story of Lord Rama, the entire performance lasts for 9 days. Effigies of demon Ravana are put to fire by the actor playing the role of Rama to mark the victory of good over the bad on the last day. This event is celebrated with great zeal and is known as Dusshera. Dialogues, songs and narrations make Ramlila complete and worth watching. Ramnagar, Ayodhya, Vrindavan, Benaras, Sattna, Almora and Madhubani are the leading destinations for being a part of the most illustrative Ramlilas.The play helps people to understand the persona of Lord Rama, the ideal man and to apply his thoughts and deeds into their lives. Based on Ramacharitmanas, the staging of Ramayana is amongst the popular forms of storytelling in North India.

Indeed, India is blessed with so many cultures and traditions that it becomes mandatory to witness these Intangible Cultural Heritage of India.