How to visit most iconic places in India in shortest possible time? The answer is short and succinct: India’s golden triangle tour.

Now comes the explanation part. Golden triangle tour in India refers to the most popular tourist circuit comprising of Delhi, Agra and Jaipur.

With destinations including some of the most prominent sites in India which have redefined and shaped the history, heritage and very identity of India, golden triangle tour is one of the best ways to discover the very heart and the soul of India.

From the bustling megalopolis Delhi where the old rubs cheek with the new and with vibrant shopping scene at various flea market and world class infrastructure to the teeming Agra, a city bursting at it seam, but home to one of the most resplendent icon the world has ever produced and then continuing on to Jaipur to discover the secret behind her name ‘the pink city’.

Golden triangle tour with its variety and vibrancy is a top pick among visitors from overseas. What’s included is a dash of history, heritage, luxury, shopping, wildlife, desert safari and elephant ride and folk performances and do we need say more? 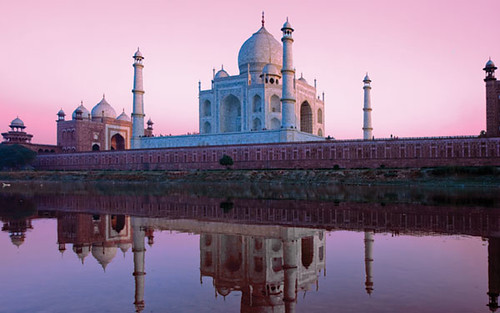 Taj Mahal in Agra: A World Heritage Site and voted one of the seven modern Wonders of the World

For the tourists opting for the golden triangle tours Delhi serves as a natural starting point of the journey as it is well connected to major national and International airports. Once getting off at Delhi, tourists can either explore the attractions in Delhi first or else opt to go and visit Agra or Jaipur first and save Delhi tour for later.Whatever may be the starting point, depending upon the preference or priority of the guests, the tour of these three historical cities offer an exciting as well as enlightening travel opportunity.

What is the India’s golden triangle all about?

Delhi happens to be one of the oldest inhabited cities of the world and also believed to have been the site of the legendary capital city if the Pandavas in the time of Mahabharata. Delhi is one of the largest and most populous megalopolis in India and is also the national capital of the world largest democracy.

Delhi has witnessed much political change over history and is home to an array of ancient and medieval monuments and ruins. The classical blend seamlessly with the contemporary which may well be witnessed in the well planned Lutyen’s Delhi, modern architecture, educated populace and the world class infrastructure.

Delhi has a total of 175 monuments which has been recognized as the National Heritage site by the Archaeological Survey of India. Major heritage sites include the Humayun’s Tomb, Red Fort, Jantar Mantar, India Gate, Purana Qila and Qutub Minar whereas the Akshardham Temple, Lotus Temple and the Birla Temple are some prime example of modern architecture. 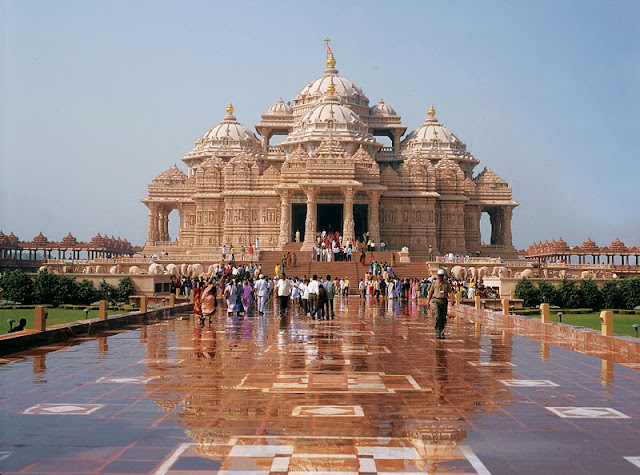 Delhi also offers a lot of shopping and leisure options to the tourists. Places such as Delhi Haat, Janpath Palika Bazaar, Chandni Chowk and Connaught Palace are popular shopping destinations for both domestic and international visitors.There are a number of getaways at short distance from Delhi if one is willing to stretch their itinerary. Sultanpur National Park, near Gurgaon is one such option especially in winter. Many species of Birds, both domestic and international can be spotted in this national park. 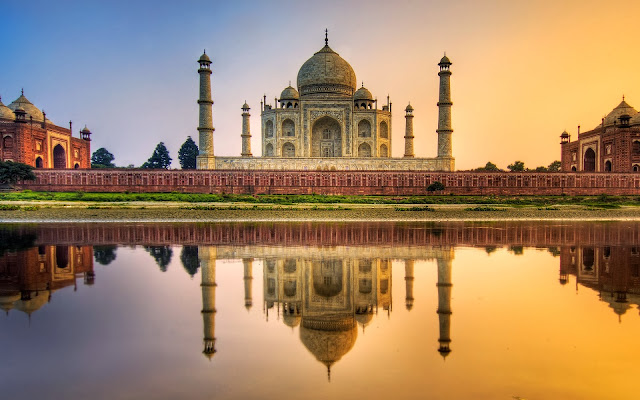 Agra is home to 3 UNESCO World Heritage Sites which includes the Taj Mahal. Taj Mahal, voted as one of the Seven Wonders of the World, is also regarded as one of the greatest monuments immortalizing love making it one of the most romantic destinations in the world.

This perfectly symmetrical mausoleum was built by Shah Jahan in memory of his wife and took 22 years and 20000 laborers to complete and is considered one of the most famous landmarks in the world.

The entire structure is constructed using white marble and has been a source of inspirations for poets and writers alike. Then there are other important historical and heritage sites like the Red Fort and the Itmad-Ud- Daulah Tomb. Other attractions in Agra include Sikandra, Fatehpur Sikri, Guru Ka Tal and Chini ka Rauza. 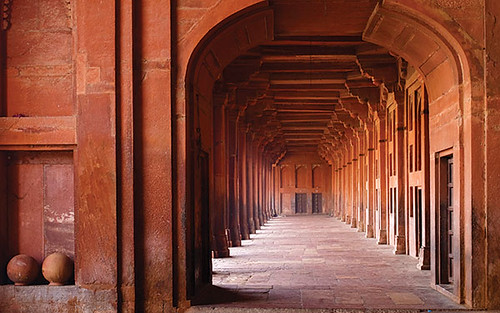 Archways of Fatehpur Sikri: Retrace the history of Mughal empire as you visit this World Heritage Site near Agra built by their greatest emperor, Akbar the Great

Agra is well connected by road, air and rail to major Indian metropolis. Agra is around 200 kilometers from Delhi. Besides sightseeing, other activities in Agra include shopping for handicrafts and leather accessories and jewelries. For the food connoisseurs, there’s an array of gourmet dining options available to savor the occasion while in Agra as part of their golden triangle tour itinerary.

Fondly referred to as the ‘pink city’ due to its medieval structures, Jaipur is one of the most popular tourist destinations in India and completes the golden triangle circuit along with Delhi and Agra.

Jaipur, build as one of the most planned city in India is a bustling megalopolis and has usual bedlam and congestion of typical Indian cities. Resplendent fortresses nestled atop hills, majestic palaces and an array of monuments stand testimonials to the glorious past of this erstwhile princely state of Rajputana. Hawa Mahal in Jaipur is one of the most popular landmarks in India. Photo courtesy luciedebelkova.com

One of the top tourist places in Jaipur is Chokhi Dhani. It is an ethnic resort in the outskirts of the city. Visitors could get a peek into the heritage and cultural legacy of Rajasthan in microcosm at Chokhi Dhani.

Folk dance performances, puppet shows, camel ride and numerous other activities are performed inside this ethnic resort in Jaipur which is followed by a sumptuous 5 course meals to conclude the day’s proceedings.
Yet another appeal of Jaipur is the vibrant shopping scene Cornucopia is what defines shopping experience in Jaipur. Some of the most in demand items among shoppers include silver jewelries, precious and semi-precious gemstones, blue pottery, handmade footwear, and multicolored dresses.

Kripal Kumbh (for high quality blue pottery items), and Anokhi (with high-quality textiles is well worth visiting) are some of the best in the trade for those who appreciate art and craftsmanship.

Accommodations are available in all categories including luxury hotels and palaces which are now converted into heritage hotel. If its the indulgence you are looking for during your stay in Jaipur, go for one of the heritage hotels in Jaipur. And for the best in the city, we’d recommend Taj Rambagh Palace.

What is the best time to go for golden triangle tour of India?

Since this tour circuit is about exploring Delhi and Jaipur, the best time to plan your vacation is winter. From November till February, the weather condition is ideal for sight seeing. Summer months from mid March till mid October (including monsoon in between) could get rather punishing due to hostile weather. Since this tour is more about sightseeing like forts and palaces (which means walking), winter months are best to embark on a golden triangle tour.

How could we extend our golden triangle tour package to have more of India?

India’s golden triangle tour could be done in just 4 days to a week’s tour itinerary. But if you have enough time up your sleeve there are plenty of extensions to get more out of your vacation in India.

To visitors, Rajasthan offers plenty of extensions. if you are interested in culture and history, destinations such as Jodhpur, Udaipur, Chittorgarh, Jaisalmer and Bikaner could serve as good extention to your golden triangle tour package.

If you are interested in wildlife, extend your itinerary to include Ranthambore which is renowned for its tiger spotting ops and a medieval fort which is now inscribed as a World Heritage Site by UNESCO. Yet another extension is Keoladeo Ghana National Park in Bharatpur (yet another site inscribed by UNESCO as a World Heritage ) which is a birder’s paradise with home to over 350 species of birds.

Then there is Bundi and Mandawa or the entire Shekhawati region renowned for their havelis with intricate carvings and paintings which attracts many visitors from overseas. Pushkar (renowned for its Cattle Fair) and Mount Abu are 2 other good extension to your golden triangle tour.

Yet another popular extension to the India’s golden triangle tour opted by many visitors is the inclusion of Khajuraho (a World Heritage Site) and Orchha (preferred for its heritage and pastoral ambiance) in Madhya Pradesh.

Visitors also extend their golden triangle by traveling to Golden Temple in Amritsar which is often considered one of the top ten places in the world to visit before you die and travel all the way to Wagah Border to witness the renowned Beating Retreat Ceremony.