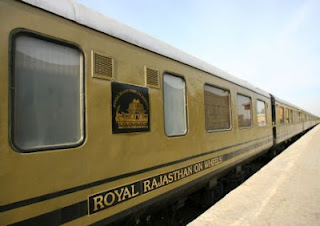 Indian luxury train, Royal Rajasthan on Wheels was flagged off at the Safdarjung Railway Station, New Delhi for its first journey of the season. The official check in formalities began around 3 in the afternoon when guests starting converging on the Safdarjung Railway Station Platform. As the train arrived, the traditional “Tikka” ceremony began with trumpets playing in the background. Once the check in formalities were completed, the guests were duly escorted to their cabins.
The train departed at its scheduled time of 1640 hours and left for its 7 Night/8 Day journey during which it will pass through some of the most important cultural destinations in Rajasthan. Some of the destinations in the journey’s itinerary include Jodhpur, Udaipur, Jaipur, Agra and Varanasi. The train has often received accolades for its premium services and contemporary facilities, apart from its 22 stately decorated coaches. It’s been an eventful couple of months for the Royal Rajasthan Wheels, having been nominated as Asia’s leading luxury train by World Travel Awards. Indian Holidays Pvt. Ltd. has announced further discounts on all bookings made for Royal Rajasthan’s upcoming  journeys in the season.